25-year old Lebanese engineer, Fouad Maksoud, made it to the Final of Stars of Science
نجوم العلوم, the biggest scientific competition in the Middle East, after receiving the highest average (96/100) in the history of the program for his invention. Three other contenders reached the Final as well.

On 25 November 2017, a six-day online public voting that had taken place prior, combined with the expert jury vote, earned Fouad Maksoud a score of 43%, thus making Fouad the Arab world’s top innovator of Stars of Science’s 9th edition.

Fouad’s invention consists of a nanotechnology machine that can transform ordinary apparel/clothes into waterproof drug delivery systems healing wounds, burns, diabetes ulcers, and muscle strain. This invention is considered as a major breakthrough in the fields of nanotechnology and medicine, patented by Fouad at USTPO – United States.

Front Page Communication is proud to have supported the voting drive in favor of Fouad by leveraging its offline and online media contacts and its repertoire of most-followed bloggers/influencers, in addition to its own database of select names and personalities, let alone its staff’s personal social media networks. 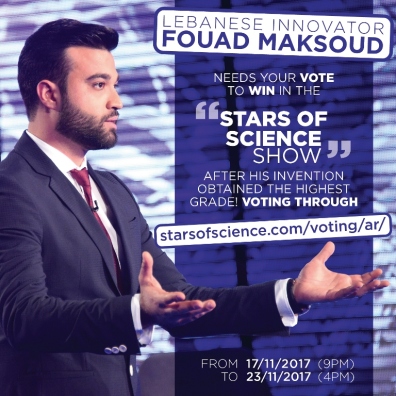