Wednesday 9th November 2016 witnessed the launch of the book AD Vitam at the 23rd edition of “Le Salon du Livre” with BIEL as its venue.

After its English original was published under the title “Play it Again”, and its Arabic counterpart, this French version, titled “AD Vitam | Une Vie de Pub”, relates the story of how the Beirut advertising agency Publi-Graphics was built by Mustapha Assad into a powerhouse spanning the MENA region from 1973 through 2012.

A conference-debate session was first held, attended by distinguished guests from the marketing communications industry, and from official, business and professional circles as well, along with a noticeable student presence.

Mustapha Assad greeted the audience under the theme “The Passion of Communications” and inspiring the new generation from the experience of industry pioneers. Having elaborated on the theme, he further introduced his other three co-panelists: Mr. Camille Menassa, Chairman Front Page Communication, who spoke of ‘The Power of Communications”; Mr. Alain Khouri, Founder and Honorary President of the mighty regional advertising group Impact/BBDO, who spoke on Advertising as “A Love Story”; and Prof. Alain Brenas, Director of ALBA University’s School of Cinema and Audio-Visual Direction in addition to the Graphic Design and Advertising programs, who spoke about “Taught Communications | Between What’s Acquired and What’s Innate”.

In the Q&A session that followed, the debate that the questions created with all four panelists added stimulating value to the rich substance of the speeches delivered.

A book signing by Mr. Mustapha Assad followed, animated by a steady flow of avid buyers of “AD Vitam” throughout the evening. As with its English original and its Arabic version, all proceeds from the sale of AD Vitam are destined to support charities in Lebanon.

Photos
Click on the picture to see all photos 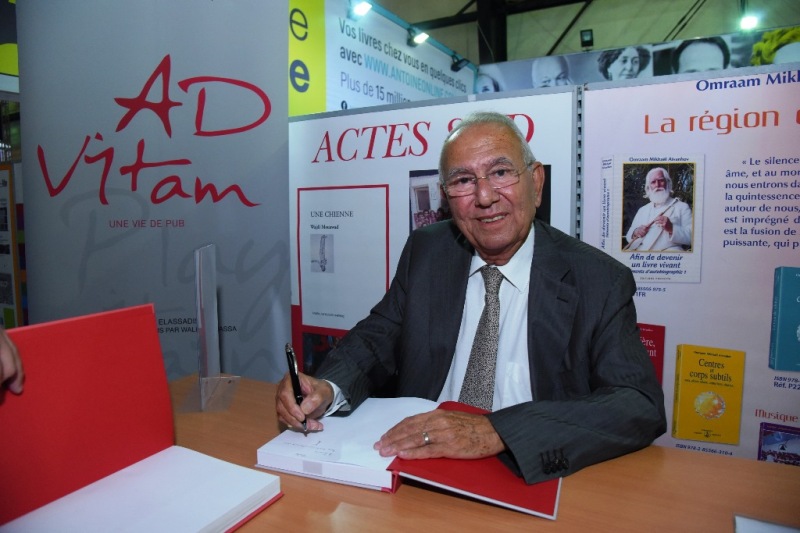